If you're happy to travel

You can catch Million Dollar Quartet at Hale Centre Theatre in Sandy, showing Until Aug 8, 2020 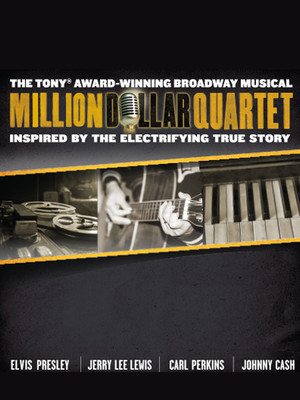 The legendary four return to the stage once again!

Alert me on return

The Hit Broadway Musical is back!

The legendary four return once more in this limited tour of the Broadway hit musical, Million Dollar Quartet! Experience the magic of Elvis, Johnny Cash, Jerry Lee Lewis and Carl Perkins on stage together with all your favorite songs, including Blue Suede Shoes, Fever, That's All Right, Sixteen Tons, Great Balls of Fire, Walk the Line, and MANY more!

Million Dollar Quartet is not just about the music. The songs are all laced together with stories and anecdotes from the famous foursome and the manager of Sun Records, Sam Phillips. The show acts as a mini-history lesson about the birth of rock 'n' roll and the wider social changes that were afoot at the time.

WHAT IS MILLION DOLLAR QUARTET ABOUT?

On a cold and wet December night in 1956, four young musicians gathered at Sun Records in Memphis for what would be one of the greatest recording sessions ever. You may have heard of them - they were Elvis Presley, Johnny Cash, Carl Perkins, and Jerry Lee Lewis, between them making up the eponymous "million dollar quartet". Not an easy feat back in the Fifties!

This impromptu jam session would become the basis of musical legend, four icons of the rock 'n' roll era together singing and recording in one room for the first and only time. Fortunately for the rest of us, the sound engineer who was working at the time was smart enough to press 'record'. And thanks to this quick-thinker, we have the chance to re-imagine the goings-on in that studio.

And before you stop reading

Read all reviews Write a review

Sound good to you? Share this page on social media and let your friends know about Million Dollar Quartet at Cheyenne Civic Center.

Keep up to date

I want email news and updates for events in my area! Read how we protect your data.

You know the drill, websites need cookies to make them work. Details of how we do it here. Hello! It's probably obvious, but we need to let you know that we use cookies to enable us to run this website and for it to actually work! You can find lots more detail in our Cookie Policy.
Got it!